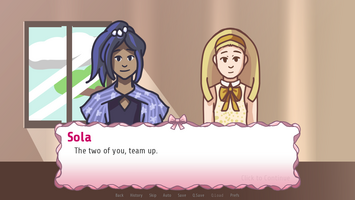 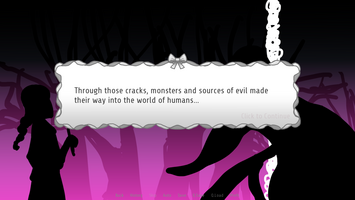 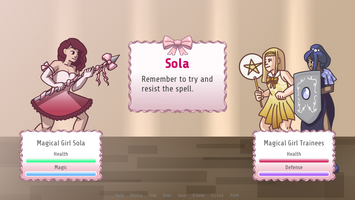 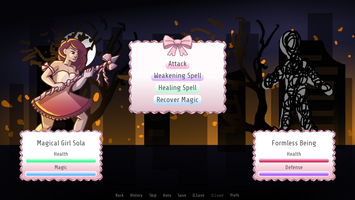 I'm going to keep working on this game after the jam. I had so much fun making it.

A Magical Girl's Duty took me about a week of almost whole-day work to make.

I had nothing much to do, since the whole city is under community quarantine, so I decided that I should join a game jam to take my mind off of things. I searched around for interesting looking jams, and the Magical Girl Game Jam caught my eye.

Before I knew it, I found myself engrossed in making character sprites, in drawing textboxes, and in thinking of what could be an interesting magical girl story. I put in a lot of hours in a short period of time... because I had nothing else to do. Surprisingly, I found my end result quite nice for a one-week game. Even though it's unfinished, I'm proud of it!

I don't usually write devlogs, but I'm writing one in order to record my feelings. This is an important thing for me, because I'm going to keep working on this even after the jam. I want to finish it.

It's unfinished, but it will be finished.

This will probably be the first game jam game I'll polish.

Here are the tools I used:

I used CC0 music and sound effects. I sped up some of the music (I don't remember which), and I combined and edited a bunch of the sound effects (and I don't remember which ones I chose specifically) to create sounds that I thought fit the action. Unfortunately, I don't remember where I got each one and it would take so much time to backtrack and look for my sources... However, the nature of CC0 is that I don't have to cite them, and can combine and edit and pretty much do what I need to do with them, and that's the reason why I love CC0.

The story took on a life of its own. I didn't expect it to get as dark as it did towards the end, but I just wrote and wrote and wrote, since it's a jam, after all, and game jams make me keep going even if I'm tired because of the deadline.

I hope you enjoy playing it!

Get A Magical Girl's Duty